We went to the Cubs-Angels game last night at Wrigley Field. While the game was a lot of fun, and Alfonso Soriano is happy and amazing, the real gem of the night was the SportsWorld shop across the street from the stadium. We headed straight to the clearance section because we had no interest in buying a $200 Darwin Barney jersey or any other legit Cubs apparel. What we found was better than anything we could have possibly expected/hoped for. What follows is a countdown of the 25 most incredible jersey/shirseys we found.

25. Doug/Dog Fister: No Verlander jersey in sight, just this poor replica jersey of the Dog Fister himself.

24. Steve Lombardozzi: Everybody loves scrappy switch-hitting utility players. Get yourself a Lombo jersey. 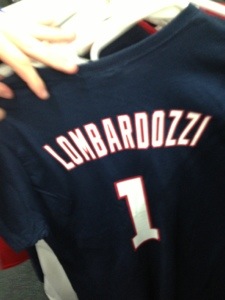 22. Michael Young: The classiest of the classy. I was hoping it’d be Delmon, but this’ll do. 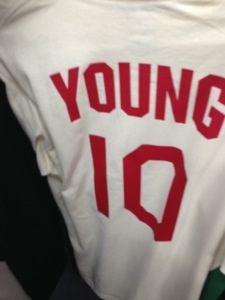 21. Sean Rodriguez: Remember when he was really good for like three weeks last year? Neither does anyone.

20. Trevor Plouffe: This was an authentic jersey. Such a waste. Wouldn’t it be cheaper to put “Mauer” and the number “7” anyway?

19. Casper Wells: I don’t even wanna talk about it. 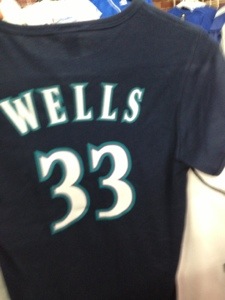 18. Craig Stammen: The essential ROOGY. Stammen is semi-fun to watch but is this really the reliever jersey you want from the Nationals?

17. Robert Andino: Yeah, he sent them to the playoffs. But since he’s been traded to Seattle, he’s done absolutely nothing.

16. Nyjer Morgan: Nyjer Morgan was absolutely crazy and the fans loved him or hated him. Just seems dangerous to wear his jersey. 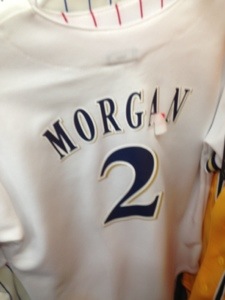 15. Chien-Ming Wang: The Nationals were excited to acquire him in 2011, but he only managed to throw 94.2 innings over two years with the team. He gave up 59 runs in that brief stint with the Nats.

14. Jake Arrieta: The Cubs just acquired Arrieta last week, so maybe this local Chicago shop just wanted any Arrieta jersey in as soon as possible? Jake Arrieta is 27 years old and has a career ERA of 5.46 over 358 innings. 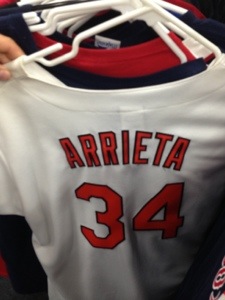 13. John Farrell: I have honestly never seen a manager’s jersey or shirsey being sold or worn anywhere by anyone. So weird.

12. Don Kelly: One of Jim Leyland’s favorites, Kelly is the essential fourth outfielder.

11. J.J. Hoover: It’s very very rare that you see the jersey/shirsey of a relatively new middle reliever. Because duh. 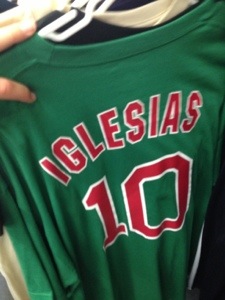 8. Tony Gwynn Jr.: I suppose the name recognition here helps, but he has been a remarkably insignificant major leaguer. 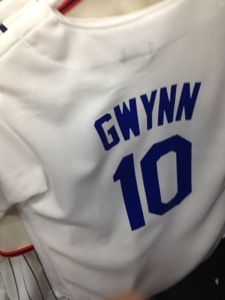 6. Juan Rivera: When is the last time Juan Rivera did something interesting on a major league baseball field?

5. Brayan Villareal: These reliever shirseys are just killing me. WHY JUST WHY

4. Felix Pie: He will always have a special place in the hearts of Cubs and Orioles fans as that guy who was named Pie. 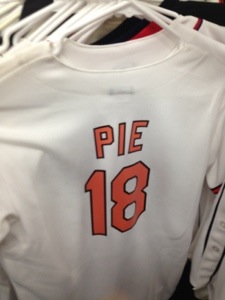 3. Shelley Duncan: THERE WERE MULTIPLE SHELLEY DUNCAN SHIRTS. EXPLAIN THAT.

2. Michael Gonzalez: Jake thought it was Gio Gonzalez at first glance, but I quickly corrected him and oh my god how is this even a thing? Mike Gonzalez is a left handed reliever that spent ONE season with the Nationals. I’m so confused.

1. Mark Ellis: All I want for every gift giving holiday ever is a Mark Ellis shirsey because I care about excitement and personality. Unreal.

Here’s to the greatest clearance section of all time.