It’s been several months since I’ve done one of these, but going back and looking at the ones I’d stockpiled inspired me to return to this investigative game.

This is a tough one to discuss without any serious spoilers, but let’s just say Taijuan Walker’s cutter will never be nearly as dangerous as any of the weapons Tom wields during his stint on Homeland. Obvious racial similarities be damned, I can’t be convinced by this link until Taijaun goes missing and becomes a national security threat.

Jake did a helpful Venn diagram way back that sums this one up pretty well. 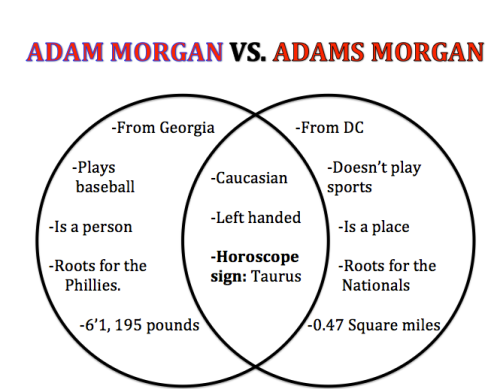 While some hopeful Royals fans might want to call Yordano their Ace, there isn’t much connection here at all. I have no idea if Yordano has any strong opinion about pets, let alone detective work, but I have a hard time believing that he has any time for it since he’s so busy throwing 117 MPH fastballs. Unlikely.

I have high hopes for this one. Much like Domonic, it takes Encyclopedia an awful long time to figure things out. Encyclopedia’s real name is Leroy, similar to Domonic’s middle name, Larun (which I have absolutely no idea how to pronounce. Laroon? Lair-un? La-ron?). We all forgot about Domonic after he was ranked the number three prospect in baseball behind Mark Trout and Bruce Hooper. However, slowly but surely, Domonic is suddenly hitting all the home runs and is the best offensive player on the Phillies (mostly by default). These two Browns both preach patience within their craft and I can’t ignore that.

In terms of mental instability, this is almost a perfect match, Sure, aesthetically they don’t look very much alike but you can’t deny how unpredictable the actions of these two Morgans are at all times. The obvious difference here is how much attention Nyjer craves compared to Dexter’s desire to stay hidden. Also I just wanted to do this one so I could point out that Nyjer Morgan is currently playing for the Yokohama BayStars in Japan and has an .832 OPS. I don’t miss him at all.

Well it certainly looks right. I’m not sure if Josh is as tight with Amanda Bynes, but there is a good chance that Josh listens to Waka Flocka Flame and we all know how tight he is with Amanda. We can all agree that Drake and Josh would’ve been a much better show with this Josh as the brother. Also, Drake is legitimate cousins with Diamondbacks “closer” Heath Bell and that’s pretty much where this one stops.