This past January, Baseball Prospectus’ Sam Miller explored the possibility of former Orioles slugger Mark Reynolds having a very unfortunate visual deficiency. It got me thinking.

Baltimore Orioles first baseman/designated hitter/occasional disastrous right fielder Chris Davis is off to an unbelievable start to the 2013 season. Through 14 games and 58 humble plate appearances, Davis is slugging a comical .784 with 20 RBI and 6 dingers. In 2011, split between Texas and Baltimore, Davis drove in 18 runs and hit 5 dingers over 210 plate appearances. Last year, he broke out in a full season with the O’s, blasting 33 home runs and driving in 85. He’s always had big time raw power, but it’s never translated to this extent.  So what changed? What has changed about Chris Davis that has turned him into a true middle-of-the-order threat?

It had to be something subtle, I pondered. He hasn’t developed a new approach or magically acquired improved hand-eye coordination to help reduce the strikeouts. I believe Chris Davis has actually eliminated a part of his game in order to improve his performance.

After nearly a full 10 minutes of research, I’ve concluded that Chris Davis has decided to stop blinking. It seems hard to comprehend, but the evidence is overwhelming. Let’s take a look back at Davis’ days as a Texas Ranger.

Here are some conveniently timed screenshots of Chris Davis participating in interviews as a Ranger: 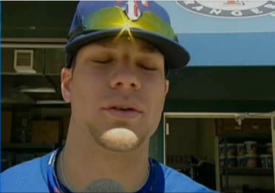 Here is Chris Davis blinking, or being a pervert:

Here is Chris Davis blinking in front of his locker (notice his abysmal numbers through 45 games): 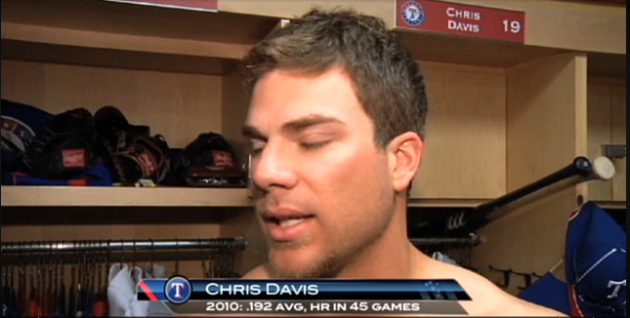 Here is Chris Davis blinking after hitting a home run:

So we’ve identified the problem. Has Davis really fixed this horrendous flaw in his game?

Here is Chris Davis not blinking as two female fans admire his biceps:

Here is Chris Davis not blinking while being interviewed during spring training:

Here is Chris Davis shirtless and still not blinking:

“You thought I was gonna blink, right? Wrong.”

I rest my case, your honor.