Last month, I wrote a whole lot of words ranking the 30 original Backyard Baseball kids as major league free agents. You can read that gargantuan post by clicking here. However, these rankings ignored the kids’ pitching ratings. So here we are! These rankings are based on the usual HOW MANY BASEBALLS rating system. Players whose ratings were tied were ranked according to my experience pitching with or batting against them.

(a huge thanks to Bailey Bowers, who made these .gifs, along with the original .gifs of all the Backyard kids’ swings, which you can see by clicking here)

Notes: She’s the best, and it’s not close. Her long hair helps to hide the ball when she brings it behind her head before whipping it towards the plate at blinding speeds and with insane movement. Batters have no chance. She’s probably the only NUMBER ONE STARTER among the Backyard kids, and justifiably so. Along with the immense talent, Delvecchio brings the Italian spunk that you just can’t find in Anthony Rizzo or Alex Liddi.

Notes: Luanne has easily the most deceptive delivery among all Backyard pitchers. Her ability to juggle her beloved teddy bear and throw strikes is unparalleled in the baseball universe. Her pink teddy definitely hinders her ability to field, but she’s striking out so many batters that it doesn’t usually matter. Unless she’s got Dmitri backing her up at second base, like in this .gif, in which case, she might be running some crazy high BABIPs. Stuff wise, she’s one of the premier arms. The ball just explodes out of her hand and she knows when to use her secondary stuff. Luanne fails to really ever leave the mound, as her right foot finishes tilted on its side on top of the mound, but hopefully she can learn to use her whole body and drive towards the plate in the future.

Notes: Widely regarded as one of the most dominant closers in the game, Amir brings power and confidence to the mound to back up his impressive array of pitches. The fastball can sit anywhere between 97-100 with sink and run and cut and tilt and shape and other words for pitch movement. With such a ridiculous heater, Amir barely throws any off-speed stuff because he is so confident that he can blow hitters away with ease. While this has worked for him so far against elementary schoolers, it will be interesting to see how he adjusts when facing major league hitters who can square up velocity. For now, Amir will just keep throwing gas. Mechanics wise, Amir is pretty clean but doesn’t appear to have the biggest stride towards the plate. Sure, you can blame it on his tiny legs because is a small child, but you also might question his lack of desire to maximize his potential. Definite question marks.

Notes: Far and away the most controversial Backyard pitcher/player in the game, Kenny combines paraplegia with an obnoxious sense of self-importance whenever he takes the field. Don’t even get me started on all the balks this kid is probably getting away with, but more importantly, does he have to spin? It appears that he is throwing the ball so hard using only his upper body that it propels him and his superchair to do a complete 360 before the ball even reaches home plate. It’s safe to say that no one has ever seen this delivery before. Kenny has a distinct advantage on the mound in that every batter facing him for the first time allows him to strike them out because they feel bad for him. This has skyrocketed his K/9 rates in his brief career thus far, and is probably not the best indicator for performance going forward. Don’t get me wrong; Kenny is a great pitcher, with one of the better slowballs in the game and a devastating right hook at times. But don’t underestimate the risk with this pitcher.

END_OF_DOCUMENT_TOKEN_TO_BE_REPLACED

My favorite movie ever is Angels in the Outfield. It reminds me of when I was 6 years old and my biggest concern was whether or not Delino DeShields got a hit that day. I recently re-watched and .gifed all the best parts. There are two categories: Triscuitt Messmer and not Triscuitt Messmer.

George Knox is done with your shenanigans. He’s also done with the post-game spread. Also, what are those red plastics cups doing in the clubhouse? Maybe the Angels sucked in the beginning of the movie because they were too busy partying like teenagers.

This how we all feel when we watch Jose Fernandez. Angels goofball pitcher Whit Bass must have seen into the future or something. Also of note: another player on the Angels with a fish name. First Whit Bass, then Tim Salmon, and now Chris Iannetta.

Okay so basically the Angels catcher Triscuitt Messmer is the best thing ever. It’s a Japhet Amador body but behind the dish. He has the social skills of Zack Greinke with Asperger’s and the accent of a bleacher creature. The base running is easily base-clogger status, but his #want is off the charts. Let’s take a closer look at Triscuitt… (also, his name is Triscuitt)

END_OF_DOCUMENT_TOKEN_TO_BE_REPLACED

#rig is more than just a metric or a scouting term or a joke. It’s way of life. It’s everything and nothing at the same time. Our dad Jason Parks described #rig as “#swagger only more penis specific.” We want to take his perfect idea and perfect it, which doesn’t make sense at all.

Coming in at number 5 on our rig rankings is Cincinnati Reds relief pitcher Aroldis Chapman. With a schlong like kong, he patrols the pitcher’s hump like a man on a mission, but not a Morman mission, a more-man mission. 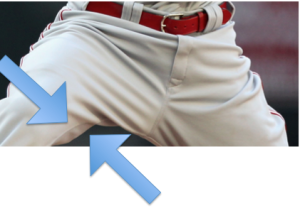 END_OF_DOCUMENT_TOKEN_TO_BE_REPLACED

Nationals Pitcher Steven Strasburg had a particularly short outing last night, only going 1 1/3 innings. His removal from the game was a result of his inability to hit spots. If a pitcher doesn’t hit spots, he won’t be successful. Let’s see how bad Stras really was.

His first real miscue of the game came after the leadoff home run.

END_OF_DOCUMENT_TOKEN_TO_BE_REPLACED

Here we see 93 year old Jason Giambi throwing up his helmet and catching it. Clearly he decided that scoring was not the priority here and he just wanted to show everyone on his team that he still has really good hands. (Sidenote: he doesn’t). It’s unclear why the Indians were given the victory seeing as Giambi never scored but I suppose the umpires were so impressed with Jason’s coordination that they decided the deserved the W anyway.

END_OF_DOCUMENT_TOKEN_TO_BE_REPLACED

Pitching genius and overall awesome dude Doug Thorburn is a writer for Baseball Prospectus. He knows things about pitching that astound the common mind. The dude is a boss and you should read all his stuff. And because we could never do what he does, we decided to analyze pitching in our own special CFB way. That’s how we started our new series: Pitching Backwards: Let’s Get Analytic. Hope you like it.

Jennings is a relatively underwhelming pitcher. He doesn’t throw particularly hard or have particularly great movement. He’s just a crafty lefty who can throw 90 mph. And like all crafty lefties, Jennings was looking for an edge.

END_OF_DOCUMENT_TOKEN_TO_BE_REPLACED

It’s been a while since I did one of these, so it felt right to bring it back tonight as Darvish is coming off the DL to face the Yankees at home. Despite missing a few starts due to injury, Darvish is tied for the major league lead in strikeouts with 157 in 119.1 innings. Tonight, he will face a desecrated Yankees lineup and should be able to strike out Luis Cruz more than once. In case you forgot how fantastic Yu is, here’s a refresher:

END_OF_DOCUMENT_TOKEN_TO_BE_REPLACED

As if he wasn’t gonna win. IT’S A CESPEDES FAMILY VICTORY.

There must be something about Dioner Navarro that makes pitchers want to try something new. We’ve already seen Travis Wood and Ryan Cook pull out the backwards pitching method with Navarro involved. This time it was Francisco Liriano who decided that a through-the-legs glove flip was the best way to attack the chubby Pudge.

This is probably the most torque and power we’ve seen so far as Liriano really loads up his core to get as much velocity behind his glove flip as possible. He displays great posture at the moment of release. Watch how his back stays perfectly level as he flicks his glove. It’s amazing how he doesn’t even glance at home plate before releasing the ball. This is definitely an efficient way to hold runners on. Ain’t nobody stealing on this delivery.

We thought that we had seen the last of it.

Garrett Richards showed us what it meant to stretch the limits of pitching mechanics.

Earlier this week, Marlins phenom Jose Fernandez did it again.

What happened today is completely unprecedented. Two pitchers on two different teams performed their personal rendition of what seems to be baseball’s newest trend. The Chicago Cubs were in Oakland facing the A’s. Cubs starter Travis Wood had held the Cubbies scoreless through 3.2 innings when Nate Freiman…approached the plate.